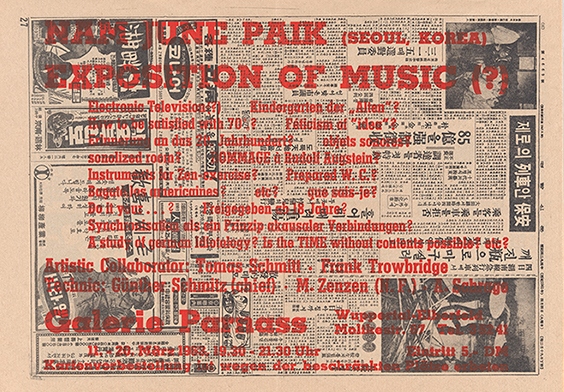 Poster for Exposition of Music—Electronic Television

This unique poster, printed on Korean newspaper sheets, were for Paik’s first solo exhibition Exposition of Music—Electronic Television at Galerie Parnass in 1963. They show that Paik decided at fairly short notice to add “Electronic Television” to the exhibition’s full title. While working on the show, he had been keeping his television experiments almost completely secret.

Galerie Parnass in Wuppertal was run by architect Rolf Jährling and his wife Anneliese. It had been an important exhibition space since the 1950s and was the scene of the first public Fluxus event in June 1962, the Kleines Sommerfest: Après John Cage, in which Paik also took part.